A new documentary on pre-code horror, science fiction, and crime comic books of the 1950s, HAUNTED THRILLS explores the lesser known publishers and titles of the era and spotlights the writers and artists who made it happen.

Haunted Thrills is midway through it’s 2021-2022 film festival run and is an official selection in 11 festivals so far, garnering 5 awards for Best Short Documentary Film. This doc is a companion piece to Mike Lyddon’s previous feature film WITCH TALES, a horror anthology movie that adapts pre-code horror comic book stories to the screen.

HAUNTED THRILLS (2021) will have its world premiere in October or November of 2021 and then released across multiple platforms including Rumble, Youtube, Bitchute and others.
A companion featurette to Mike T. Lyddon’s horror anthology movie WITCH TALES aka CUENTOS DE LA BRUJA (2020), the Haunted Thrills documentary looks at many of the publishers and artists who drew horror comics that were considered so extreme that it led to the Comics Code Authority stamp, one of the largest cases of industrial censorship in U.S. history.
Everyone knows about Stan Lee and Marvel Comics but few know that he was one of the original pre-code horror editors when he worked for ATLAS in the late 1940s.  We interview two artists who worked at Atlas, Joe Sinnott and Vic Carrabotta.
Also, we speak with the great Everett Raymond Kinstler about his days with AVON and ZIFF-DAVIS publishers.
Trailer is now on RUMBLE and YOUTUBE, or watch it here –

One of the greatest figures in the history of comic books and American pop culture in general,  Stan Lee (Dec 28, 1922 – Nov. 12, 2018) re-popularized the superhero comic genre in the early 1960’s when Marvel Comics released THE FANTASTIC FOUR (Nov. 1961) followed up quickly by THE AMAZING SPIDER-MAN, IRON-MAN, THE HULK, THOR and countless others.
But many people are not aware that Mr. Lee was inventing  superheroes many years before Marvel’s silver age.
Timely/Atlas/Marvel Comics in the 1940’s saw Stan Lee Lee’s first superhero co-creating The Destroyer in Mystic Comics #6 (August 1941) and supplying “text filler” for Captain America comics around the same time.
But it was in the late 1940’s after the end of WW2 when superheroes were not selling as well as they once did, so Timely/Atlas publisher Martin Goodman and upcoming editor-in-chief Stan Lee  quickly jumped into more crime, horror and science fiction comics to satisfy a new generation of readers.
Months before EC Comics hit the stands, Atlas/Marvel was publishing titles such as MARVEL TALES, ASTONISHING, SUSPENSE, SPELLBOUND and many others, some of them lasting through the pre-code era into the late 1950’s/60’s.
Stan Lee knew talent when he saw it, and so it’s no surprise that he gathered some of the best names in the business along with some young up and coming talent including artists Russ Heath, John Buscema, King Ward, Joe Sinnott, Gene Colan, Victor Carrabotta, Joe Maneely, George Tuska, Bill Everett, Syd Shores and countless others.
And you better believe that Stan Lee wrote many of the horror stories in these pre-code comic books, long before The Thing would shout “It’s Clobberin’ Time!”
Here we present many memorable covers to these Atlas pre-code horror comic books for your viewing pleasure and you can also watch the Stan Lee Pre-Code Comics video. 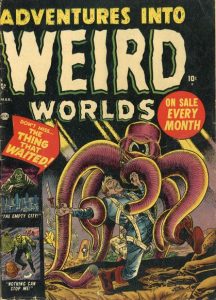 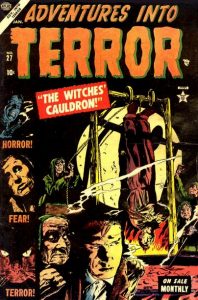 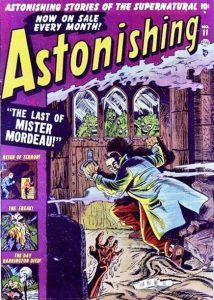 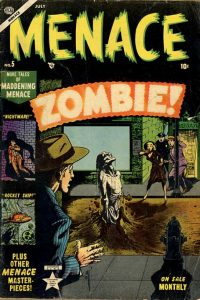 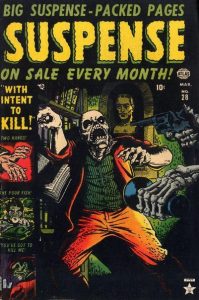