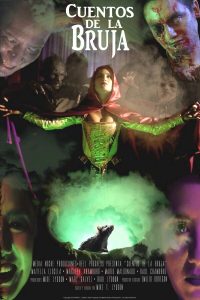 Cuentos de la Bruja aka Witch Tales, the latest feature film by Mike Lyddon, has ended it’s year long festival run having been selected in 13 film festivals worldwide winning 6 awards including best feature film.
Witch Tales, also known as Cuentos de la Bruja, was filmed in Peru.  Mike Lyddon is currently editing the English language version of the film.  The Spanish language version is an official selection in one last festival, Horror On Sea, taking place in January, 2020.
The film has three stories adapted from the lesser known pre-code horror comic books of the 1950s.  Lyddon is a big fan of those comic books and is also working on a documentary called Haunted Thrills which will hit the festivals in 2020.
He has also just sold his first short story, “Thing in the Shed,” which has been published by Deadman’s Tome in the collection titled “Monster Party” and is available here.
For more information, please follow the Reel Progress page on Facebook, and the flagship site, horroranthologymovies.com.