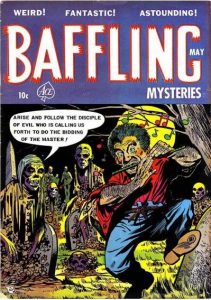 Artists included Jim McLaughlin, Charles Nicholas, Lin Streeter.
Known for the classic covers which depict someone looking at a painting or ancient drawing and saying “Why that couldn’t possibly exist!” Meanwhile said impossible creature, ghost, monster is lurking behind them.
Some of the more tame horror comic books of the pre-code era, but with some snappy covers. 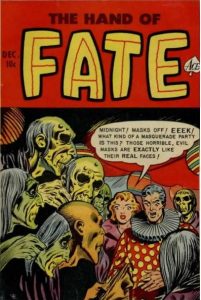 ACE MAGAZINES pre-code comic book title THE HAND OF FATE – 19 issues from Dec. 1951 to Dec. 1954.
Next up in the pre-code line from ACE and less remarkable than THE BEYOND.
Toward the end of the series, they brought in the “Fate” character on the covers as a kind of host.
“What was that noise? OHH!” and other unintentionally hilarious dialog from WEB OF MYSTERY – ACE COMICS – 29 issues from Feb. 1951 to Sept. 1955.
Some of the more tepid of the pre-code horror comics era, WEB OF MYSTERY often had characters reacting to horrific things with phrases like “Flee! The giant werewolf has awakened from his forest sleep!” 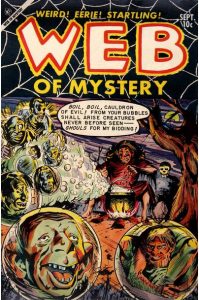 The cover for WEB OF MYSTERY #17 features the menacing witch head aka “Tunnel of Love” story is by Lou Cameron.
Cameron was the artist for many of the Classics Illustrated series including adaptations of novels by Herbert George Wells, Ann S. Stephans, Alexandre Dumas, Emile Zola and Robert Louis Stevenson.
He did a lot of pre-code horror comics for ATLAS, ST. JOHN,DC and ACE.
You can watch the Ace Magazines video here.