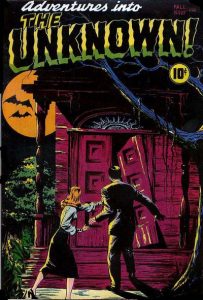 William Gaines famously declared that EC Comics were the first horror comics published.
But he was wrong.
In 1947, Avon published a one-shot all horror comic book called EERIE, which would pick up again a few years later, and ACG started publishing ADVENTURES INTO THE UNKNOWN at the end of 1948, nearly a year before EC got into the game.
It should also be pointed out that ATLAS Comics, helmed by Stan “The Man” Lee, already had a few issues of all horror comic books published before EC.
The best covers from ADVENTURES INTO THE UNKNOWN are from early issues drawn by the great Edvard Moritz.
#ACGcomics #comicbooks #horrorcomics